Game Over: Blame For Abuse Lies With Iconic Coach

Bill Littlefield is the host of WBUR and NPR's Only A Game, a weekly one-hour sports magazine.

Jerry Sandusky has been charged with sexually abusing children over a 15-year period. Sandusky has had a long, successful career as an assistant football coach with a college program celebrated for two things: winning, and head coach Joe Paterno — not necessarily in that order.

Lots of college football fans — and not just those in Pennsylvania — regard Paterno as a rock of integrity in a sea of corruption and hypocrisy. Whereas other coaches promise their recruits continuity and then leap to more lucrative jobs at higher profile football schools, "JoePa" has remained in Happy Valley.

Another coach at another university might be able to sidestep criticism by maintaining that he'd passed the buck to the appropriate bureaucrat, but it doesn't work that way for icons.

He has come to represent Penn State the way Knute Rockne once represented Notre Dame, but Paterno's reputation soared because he has been less inclined than Rockne to accept young men who weren't even pretending to be students.

Even those who aren't thrilled with most college football coaches have been thrilled with Joe Paterno. So it's inevitable that his role in this scandal would be examined.

Various trespasses are endemic to college football, and lots of them are winked at, but child abuse and its enabling are not among them. Legitimately or not, Paterno has been the face of a program celebrated for its resilience and integrity. Now it's become apparent that he didn't do everything he could have done. Paterno's close associate continued to use their Penn State football connections to access the children he allegedly abused, in part because of Paterno's negligence.

Unlike Tim Curley and Gary Schultz, Paterno has not been charged with failure to report child abuse or with perjury. He says he told the athletic director about Sandusky's alleged crimes in 2002, which, he maintains, is when the alleged abuse first came to his attention. But apparently, although Sandusky continued to operate football camps on Penn State facilities, Paterno never wondered about the result of his conversation with the A.D.

Another coach at another university might be able to sidestep criticism by maintaining that he'd passed the buck to the appropriate bureaucrat, but it doesn't work that way for icons. 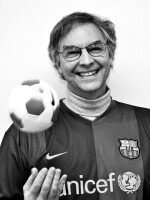