WBOI is working with our engineers and streaming service provider to address an ongoing streaming issue experienced across our platforms. We apologize for the continued inconvenience.
Station News

On Thursday, March 16, the President released a "skinny budget," which recommended defunding the Corporation for Public Broadcasting (CPB).

The skinny budget is an outline of the administration's discretionary funding priorities. It is not law. Instead, the President's submission of this document to Congress marks the beginning of the annual budget and appropriations process.

Next, Congress will review the President's budget proposal and work to develop its own budget. Congress's budget will establish how much the government can spend and include instructions on how the budget should be used, potentially including guidelines related to public media funding.

Since these budget decisions could have a profound impact on 89.1 WBOI and Classical 94.1 WBNI, and all of public radio and television (including our friends at PBS39 in Fort Wayne), we’ve created the following primer to answer your questions.

Take action now: Don’t need to read the primer to know you want to speak up about the potential loss of federal funds? You can sign a petition urging Congress to oppose the President's proposed cuts and keep public media funding in its budget.

What is CPB's role in public broadcasting?

The Corporation for Public Broadcasting (CPB) is distinct from both NPR and PBS. It’s not a broadcaster, but a private corporation created by Congress in 1967 with two primary functions: to serve as a firewall between partisan politics and public broadcasting, and to help fund programming, stations and technology.

Federal funding is essential to the mix that supports public broadcasting. The CPB provides seed money and basic operating support to nearly 1,500 locally owned and operated stations. Each $1 of federal funding leverages $6 from local sources — an inarguably strong return on investment.

Federal funding provides support for public broadcasting’s mission to ensure free and universal access to high-quality non-commercial programming that educates, informs, enlightens and enriches the public.
The loss of this funding would be a severe blow to the local services we provide.

WBOI’s and WBNI’s sole reason for being is to serve the local community. We’re a non-profit, governed by a local board. As we’ve grown we have expanded local coverage to include more newscasts, award-winning in-depth reporting, and community events.

The partnership between stations and CPB is a great example of a public-private initiative that provides such real and lasting benefits locally. The amount of our CPB grant is directly tied to our ability to raise local dollars. This means it functions both as a reward for serving our listeners, and an incentive to keep doing it better.

The CPB also covers certain costs that benefit ALL public broadcasters – the satellite system, music rights, new program development, and administrative support. Without this support, public radio and TV stations would not be able to create and broadcast the journalism and programming our audience relies on.
CPB’s share of the $4 trillion federal budget is around .01 percent.

What we know today

How much CPB funding does WBOI and WBNI receive?

This year, about 10% ($127,575) of our budgeted revenue will come from the CPB in the form of a Community Service Grant. In addition, our stations rely on the CPB for satellite access, music use rights, and other essential resources.

What would happen if WBOI and WBNI lost CPB funding?

We would immediately seek to raise the $127,575 we currently receive from our donors and corporate funders. We would also have to raise an additional amount to cover the pro-rated share of the expenses that the CPB currently pays – the satellite system, music rights, and more. If some stations are no longer able to pay their share for NPR programs, our cost for programs like Morning Edition and Wait, Wait, Don’t Tell Me could increase sharply. We could easily see six-figure increases in the cost to pay these additional expenses.

Where can I learn more? And how can I make myself heard?

A strong, diverse base of grassroots advocates is essential to ensuring the retention of federal funding. A great resource is the Protect My Public Media website. There, you can sign a petition, add your testimony and make sure your voice is heard when congressional hearings on CPB funding take place.

We can all agree that, now more than ever, the reliable, trusted voice of public radio is vital. And now more than ever, it’s essential that every listener contribute as generously as possible. If you’re already a donor - thank you. If not, now is a great time to join and show your support. 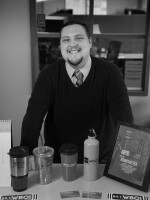 David Hunter
David is responsible for individual and foundation giving at WBOI and WBNI, including on-air fundraising. His background includes journalism and non-profit development. He spent two years as an AmeriCorps Volunteer before joining WBOI in June 2009. David also assists in the design and delivery of digital content through WBOI.org.
See stories by David Hunter